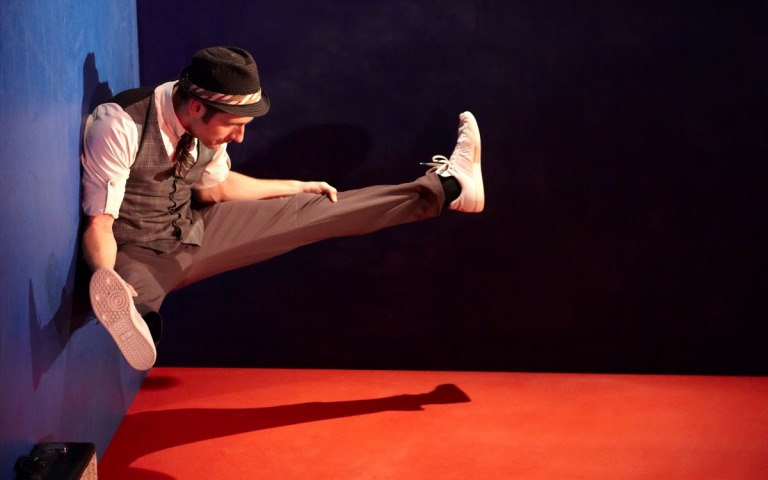 【LEO is a mind-bending, funny, surreal, and surprisingly touching work that challenges the senses and tests perceptions of reality through the clever interplay of live performance and video projection.】LEO is the unusual journey of an otherwise ordinary man whose world becomes physically unhinged.

When we discover LEO, he is alone with just a small suitcase, whiling away time in a simple room. As time passes LEO becomes increasingly aware that all may not be what it seems in his world.

As his awareness grows LEO’s reaction to his situation evolves from alarm and insecurity to curiosity and eventually to playfulness. LEO not only begins to enjoy his situation but finds new and ingenious ways to exploit it.

LEO exhausts himself playing within his new reality until he again realizes that he is alone. Then LEO’s suitcase offers him a new, totally unexpected, way to make himself comfortable and at home.
This path leads LEO to new unexpected adventures through worlds both ephemeral and imaginary until he finds himself, once again, simply alone.

With his confidence now shaken, LEO begins to accept that he needs to break the bonds of his con-finement, this room holding him hostage. In his search for release LEO not only calls on all that has gone on before but enlists the aide of a most unlikely ally – himself.

Having explored his dreams and desires and exercised his lust for life, LEO’s final odyssey is the most important of all… the quest for freedom.